What is Procedural Generation?

Procedural Generation is the method of creating data algorithmically as opposed to manually. When it comes to game development, the term random generation is used. It is mostly used to create textures and 3D models.

Procedural Generation in video games is used to create large amounts of content within a game. It creates a smaller file size for storage, less work for the developer and more randomness for less predictable game play. To give more perspective on the randomness that Procedural Generation creates we will introduce you to the game Elder Scrolls II: Daggerfall. This games world was created through the use of Procedural Generation techniques, and is roughly half the size of the British Isles holding over 15,000 towns, cities and dungeons all filled with NPC's that the player can interact with.

Before graphically orientated games, many game developers used procedural generation to construct dungeons for ASCII based systems. These games would generate rooms, monsters and treasure. An example of this is Rogue, which inspired a plethora of games called "Rogue-like". If you would like to play a "Rogue-like" game, click the link below.
http://www.myabandonware.com/game/rogue-4n/play-4n
The issue with these early games was that they were severely limited by the memory constraints of early computer hardware. This forced developers to use algorithms to generate maps for their games because there was not enough storage space in early computers for pre-made maps and content. As hardware advanced, CD's and computers were able to hold more data than what was possible in earlier times. This then allowed developers to create content ahead of time, making Procedural Generation unnecessary.

Despite hardware advancements, many modern developers use procedural generation in their games to make them more dynamic and to give themselves an easier time. Just like in the early days of Procedural Generation, the main use is still to create a sense of newness for the player. Procedural Generation is still used to create maps, but now on a larger scale. An example of a game that has used procedural generation to create a large map size is No Man's Sky.

Minecraft creates is maps by using Perlin Noise which is a basic form of Procedural Generation. Perlin Noise is used to randomly create black and white images. Below is an example of what a Perlin Noise map would look like. 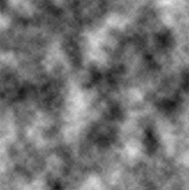 This image is then used as a topographical map, in which the lighter areas are higher elevations and darker areas represent lower elevations. Minecraft then uses this information to generate its terrain. For example the very light areas might be mountains while the dark regions could be a lake or a valley.

As part of our research we created a Perlin Noise simulator using C++ and DarkGDK. The code and files needed to run it are below. If you do not have DarkGDK installed you will not be able to use this code.

Procedural content isn't as powerful as handcrafted content. When the developer sacrifices control to the computer, the developer is losing control of what is presented to the player. All of the descriptive details of the game that have made it more unique is now going away, making it less memorable and immersive for the player.

Creating a Procedural Generation system is also extremely expensive, costing a lot of time and man power. It's also something very difficult to do well, picking a random seed and having the computer spew content onto the screen can easily be done, but having the computer create something that is coherent to the user is difficult.

Development of a Procedural Generation System

When developing a Procedural Generation system avoiding problematic material is a programmers task. This involves coming up with a thorough system, thinking of the problems that may occur within the system. Then having the system check for the problematic cases and re rolling if any of the cases are found.

Procedural Generation isn't completely random either, it is quasi random. This means that a designer is hired to come up with a set of rules on how the randomness of the Procedural Generation system can work. Designers will start by creating a level by hand for testing purposes to figure out if the mechanics and rules that have been put into the system work. The designer will also check if the material is engaging to the user. No one rule set has to be followed either. Different conditions or areas in the game can have a separate set of rules based on what type of content is needed in that part of the game. An example of this would be in Sid Meier's: Civilization V, a strategic resource like bananas would not be found in a desert area but a tropical region instead.

Procedural Generation is also used in film to create environment from empty spaces, and comes in a wide variety of applications. One of the applications used in film is called Imperfect Factory, this application helps the artist generate a large number of similar objects to fill in any empty spaces within the environment. This application also accounts for real life aspects, this means that the application knows that no two objects are alike, so it will create them differently. Massive is another application used by film makers. It is a high end computer animation and AI package that creates massive crowds of people. An example of this would be in Lord of the Rings when there are large battles as seen below. 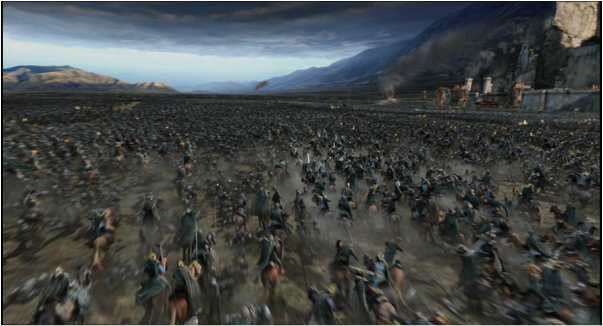